The Palace Of Justice 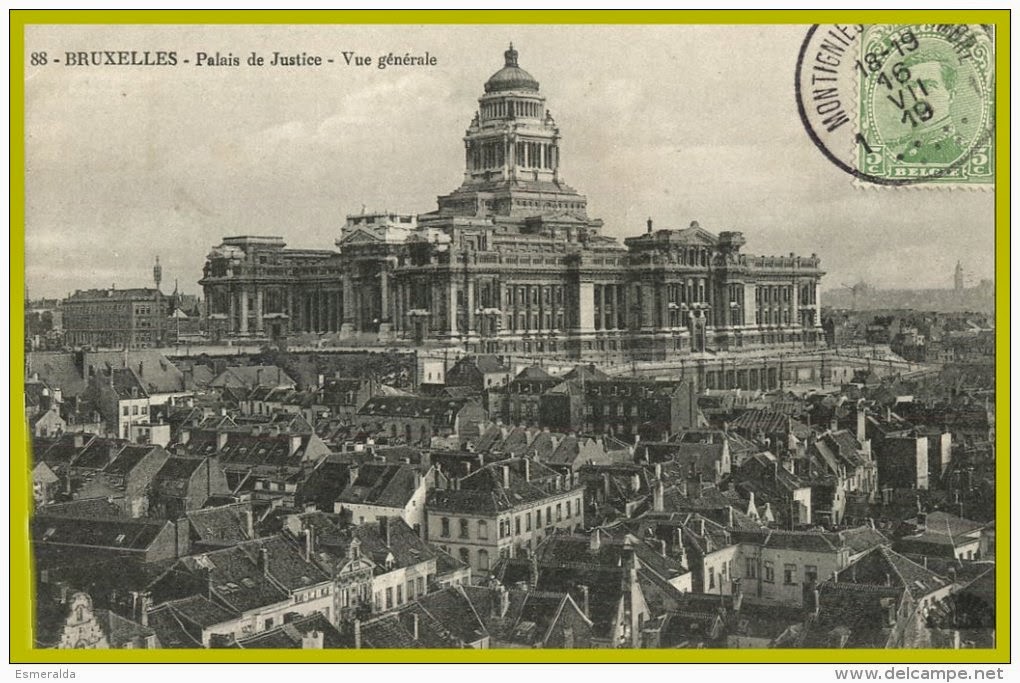 May the expenditures be as large as possible, so that the palace will be worthy of its purpose and its city. ~Jule Anspach.

Sitting upon its hill overlooking a wide span of Brussels, including the basilica of Koekelberg and the Atomium (more on those later), is the Palais de Justice which was started in 1866 and inaugurated in 1883. A propitious hill for its purpose, I suppose, considering the Galgenberg hill was where convicted criminals were hanged back during the Middle Ages.


The Palace of Justice is the Greco-Roman style creation of one free-mason Joseph Poelaert, and cost an astounding 46.45 million Belgian francs to build (about 5 times its initial budget), which is only normal when you're talking about the biggest building constructed in the 19th century! The building of this behemoth required the relocation of over a hundred inhabitants of the Quartier des Marolles, and despite the compensation received, people weren't happy with it. Which is why the word "architect" became one of the worst insults possible one could bandy about Brussels at the time.

It is therefore not that surprising that the inside of the Palace may seem like a town in and of itself, with several levels and what seems to be hundreds of obscure passageways. To get a better idea of the maze that awaits one inside, know that the Palace boasts 94 stone staircases comprised of a total of 4,320 steps, another 41 wooden staircases made of a total of 630 steps, and 29 iron staircases with 991 steps total, all contained within a building of 360,000 m3 which also houses 650 rooms, 25,000 m² of  glass for 1,513 windows, 65,000 m² of flooring, parquets and pavement, and 1,530 doors. It is even said to have at least one secret underground passageway! In any case, the maze-like structure has made it easier for certain individuals to successfully flee justice despite being within the Palace's confines.

Poelaert, as it turns out, was quite the eccentric man himself, refusing to show his blueprints and threatening to cease his work should anyone try to critique his work (a normal thing to do considering all he'd ever done before was to build half a church). The Palace became his obsession, and it wasn't rare for the architect to wake up in the middle of the night to redo his previous plans. Sickness and insanity finally brought him down and he did not live to see his project finished. This, in turn, allowed people to finally see what the final building was supposed to look like and make some necessary adjustments (such as replacing the pyramid at the top of the building by a cupola). Still, one cannot deny Poelaert's genius, and may, for instance, observe within the building (though parts of it were destroyed during WWII and subsequently rebuilt) the continuous application of the Golden Ratio.

Nowadays, the Palace is heavily guarded and will remain so at least until the Justice system is fully moved into its new, more modern (and sounder) quarters, leaving the future of the Palace itself uncertain. Plans have gone from turning the imposing structure into a shopping mall to an art museum, but all depends on the Palace's never-ending (and costly) renovations, which is why visitors now are bound to see the building surrounded by scaffolding.