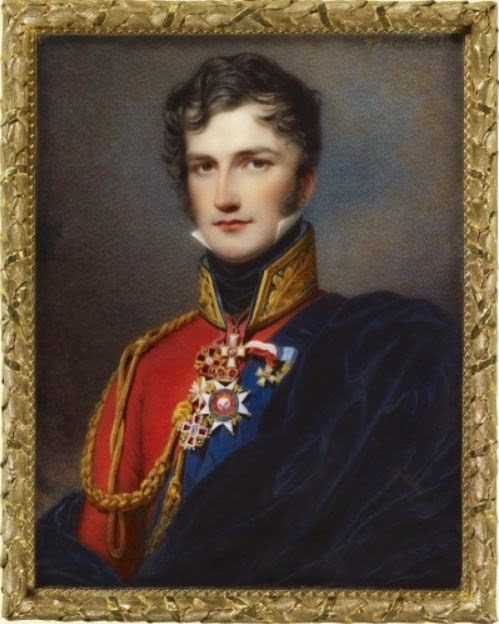 Before becoming Belgium's first king, Prince Leopold spent some time at Napoleon's court, where his good looks made him a favorite with none other than the Empress Joséphine de Beauharnais, and her sister Hortense (married to Napoleon's brother Louis), among many others.

Not only that, but Leopold was later remember by Napoleon, during the latter's exile at Saint Helena, as "the most beautiful man [he] ever saw at the Tuileries palace."

And that was before he turned 20!

And it was thanks to his good looks that the Powers That Be decided to use him to get the future Queen of England, Princess Charlotte of Hanover, to change her fiancé from Prince Willem of Orange to Leopold. As Tsar Alexander told Leopold: "you are so beautiful, no woman can resist you." Unfortunately for him, his good looks weren't enough for Charlotte's affections had been given to Friedrich Augustus of Prussia (who was himself already married, though he apparently forgot to mention this fact to the Princess). But apart from being very good looking, Leopold was ambitious and didn't quit his courting, becoming known as le Marquis peu-à-peu, or the Marquis little-by-little (although this long courtship didn't prevent Leopold from conquering more hearts, such as that of Catherine Bagration, aka the naked angel).

On 2 May, 1816, Leopold and Charlotte were married, and that's how Leopold went from being the poorest prince in Germany to a very wealthy man with a yearly stipend of £50,000 (equivalent to $6.25 million as of 2005, and twice what the Duke of York received) for life, even if his wife should die first. And though at first ambition then the Princess's beauty were what had conquered Leopold at first, he later "came to appreciate more every day...her noble heart." So it was with a broken heart that Leopold had to say goodbye to Charlotte a year later, when she died in childbirth.

But, as we all know, that was not the end of his royal career, nor that of his love life...

Source:
A Throne in Brussels